Lessons come on four legs so often, if we pay attention, we just might learn a thing or two. Lessons can also be wrapped up in the form of a gift. Since this is ‘tis the season, this is my gift, or lesson that I choose to share today.

Mercedes getting lots of loveVolunteers of Taysia Blue Rescue saved sweet fourteen year old Mercedes a few weeks ago. She had lived on a chain, outside never knowing the comforts of home and the love that my dogs certainly know. She was skin and bones to the point that the images that I saw caused me to burst in to tears. What I find so amazing is that Mercedes harbors no ill feelings toward people. Her foster home reports that she is full of sweetness and love and even a little sass in the form of an emphatic “woo”. 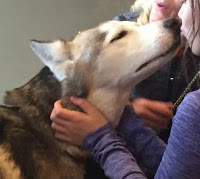 Mercedes giving love in returnDogs are masters at it and yet humans tend to be really awful at it.

Mahatma Gandhi said that “The weak can never forgive. Forgiveness is the attribute of the strong.

Dogs seem to understand that. If only humans could forgive like dogs, the world would be a better place. In the last eight years of working around rescue dogs, I probably have said that at least several hundred times. 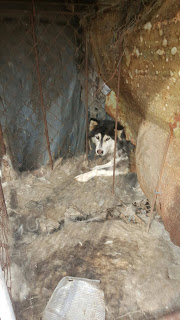 Last January a video went viral on social media. It was the image of a cowering, emaciated dog in the back of a dark and dirty cage. This dog had been raised to be butchered for food, but lucky for her, the butcher’s property had been raided; the remaining dogs on the property were saved. The woman responsible for saving these dogs, and literally hundreds of others, made one last pass at the empty kennels. Movement caught her eye and she took a few steps back and there she was, a terrified Malamute mix hiding in fear.

We’ve all seen videos of rescues and situations and we pass them around for inspiration or as an alert. We don’t believe that we will necessarily find ourselves involved, certainly not from the other side of the world. That same day the video spread across social media, I received a text from my husband that read: “Don’t be mad, but I’m saving a dog from Korea”.

I was initially pretty upset. I was at our local shelter evaluating a dog that needed our help. I am a very vocal advocate of saving the dogs in our region first. This was something that I would not be able to explain or justify. Luckily before I responded to him I took a breath as I recalled the hundreds of dogs that had fostered in our home, the hours of family time that I had given away for the sake of the rescue and the dogs. Never once had he complained, never once did he say “no”. The next text came: “Don’t worry, I’m raising the money myself, this won’t be a burden to the rescue”.

Danbee Marie has slowly progressed over the months. She plays and romps with our other dogs and literally bounds and bounces her way to my husband for belly rubs. She is still wary of strangers, she will still run and hide if someone pulls out a metal instrument like scissors or clippers. She has fear inside of her that might never go away. She witnessed cruelty and horrific acts at the hands of humans and yet she is happy to see us. She demonstrates forgiveness very day.
We don’t really need stories like Mercedes or Danbee to see the lessons that they teach; look no further than your own furry friends.

Many of us leave our dogs and go to work every day. They don’t know where we are going or when we will return, but every time, they are happy to see us. They forgive us for being human, for being forgetful, for being self-indulgent. They forgive. They move forward.

Birgit Klein, in her book, The Eternal Spiral of Life, writes, “The human being in the contact with the dog will become more and more tolerant, indulgent, and most of all grateful and able to forget grudge and projections of the past.”

When a dog develops a bond, it means something to them and your dog will not be the one to break it. A second chance is something that we all would benefit from this Holiday Season and a second chance is a gift that we should all commit to giving, perhaps most importantly to ourselves.

My wish this Holiday season is that we all take a lesson, in this case, a gift, from the four-legged teachers.

Danbee wishes you a Merry Christmas!

Thanksgiving is probably one of my favorite holidays.  For me, coming from a very small family, it tends to be a relaxing day without the hurried rush of traveling between dinner engagements.  Being vegetarian, I am exempt from hosting the epic dinner, so here I sit with a cup of coffee, my laptop and lazy Huskies and a Malamute at my feet.  My world is warm, it’s safe, it’s happy and for that I am so very thankful. 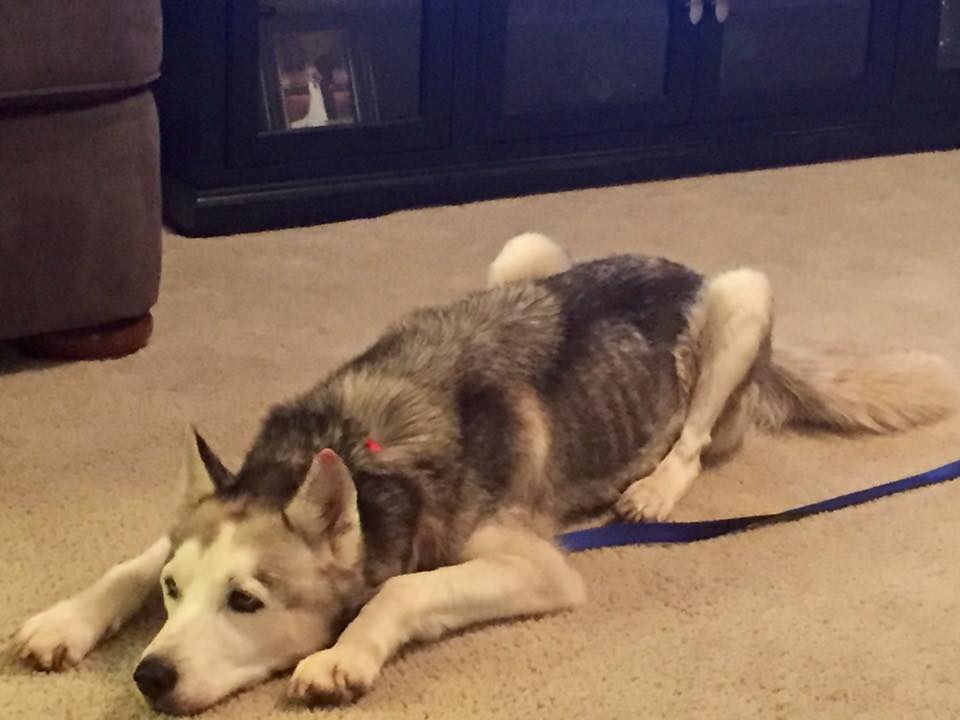 Yesterday, a team of Taysia Blue Volunteers arranged for Mercedes to leave a stressful shelter in Kansas City and make the journey to Omaha.  Kerry and Jan gave up time and mileage and gas to get her to safety.  Starla took her into her home to assess her and make sure we had a plan in place for her health needs.  Matthew and Russ welcomed Mercedes into their home last night where she will live until she finds a permanent home.

I woke up this morning to find a photo of Mercedes curled up on a soft dog bed, fast asleep and relaxed.  This feeling of peace might have been her first.  Mercedes is fourteen years old.  Even with all her fur, we can still see the outline of her ribs protruding from her small frame. Mercedes has spent the last fourteen years living outside on a chain.  Welcome to freedom sweet girl, welcome to the Taysia Blue family.  We are thankful that you are here and so very thankful for volunteers who made that happen.

I learned last night that a friend of mine, a very passionate advocate of animal welfare was denied a dog by a rescue group. She was absolutely heartbroken, she had met the dog, she had picked out his name, she had started to weave his life into her family. I couldn't stop thinking about her story last night and it's bothered me all day today.

This is not the time or the place to get in to the whys and details. Bottom line, rescue failed. A dog missed out on an absolutely fantastic home and now my friend is doing her research to find a breeder. She is so turned off by, hurt by rescue, shell shocked by the discrimination that she experienced.

Badger was my very first dog. I bought her from a breeder. I would have been denied from most rescue groups. I had a 3' chain link fence and two cats. Guess what? It didn't stop me from getting not one, but two Siberian Huskies from a breeder, and then two more from a shelter.

I am embarrassed and ashamed that collectively we, as rescue groups, choose to interrogate instead of have conversations. We jump to judgement before opening our minds and hearts to a person at the other end of an e-mail - and this ultimately, my friends, is at the expense of the animals. We pile on and suggest that someone "doesn't deserve to have a pet". What I see and hear almost every day makes me so frustrated. Certainly there are times when an applicant isn't right for a Siberian Husky and yes, we've made judgement calls and yes applicants have been denied, but I hope we are growing and opening ourselves more and more to taking the time to listen and learn first. Conversation, not interrogation.

I’ve been thinking a lot lately about tolerance, forgiveness and expectations.

I don’t know that this has anything to do with dogs or rescue, but it certainly has everything to do with humans.  And I will reiterate my belief that we can't begin to make a difference in the humane world without fixing the human world.
I’ve learned a few things lately: 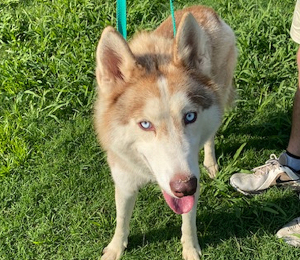 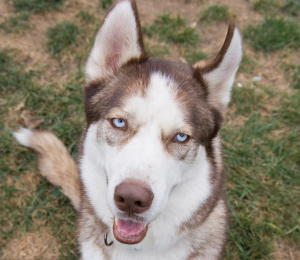 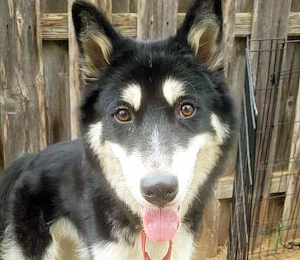 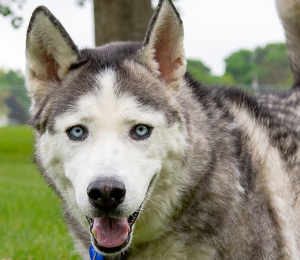 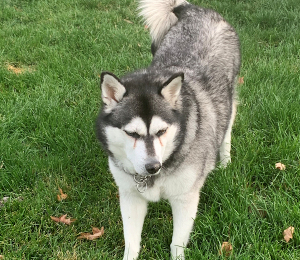 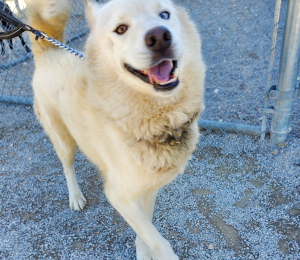 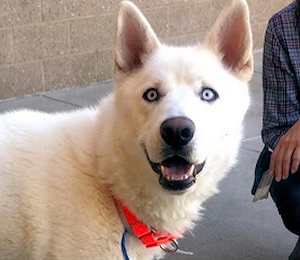 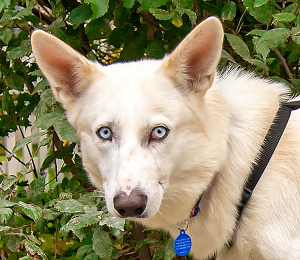 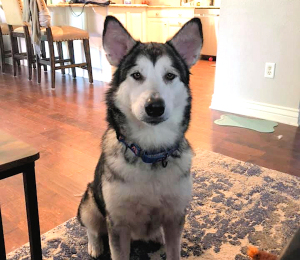 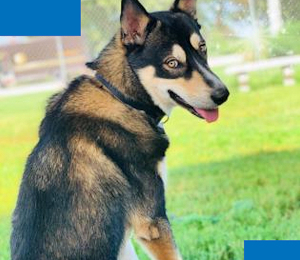 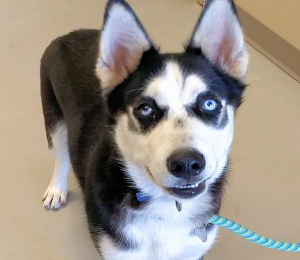 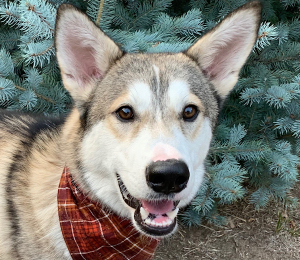